Okay, I have seen the photos from

marchek's camera from the night of the Green Building fundraiser thing, and wow, everyone looks great. They should all post their stuff, as the mood lighting suited them much better than me, although this is sort of fun: 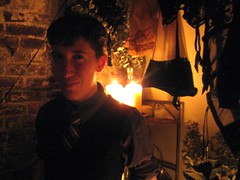 The first time I worked clinic defense was the month after I turned eighteen. Now, most people stood in a particular phalanx by the clinic door, especially during the worst of the protests. The phalanx was designed to make sure protesters couldn't crawl through our legs, that there would still be a barrier if they stuck us with pins, which, yes, they did. Then, there were the people stationed inside the clinic, if it had interior doors. Sometimes women would pose as patients and lock themselves to the interior doors, blocking them. Finally, there were the people who escorted the women in and out of the clinic.

I did all three of those jobs at various times, but mostly I either guarded the inside doors of the clinics or escorted patients.

Mostly, the women didn't talk. But sometimes they did, either about nothing in particular or dark humour. It was strange, responding to them, and always being so careful not to reveal any particular sentiment to them.

"I hate this," one woman said. I couldn't but nod, because "this" could have been anything.

She kept talking. "Always being escorted, like I can't go to the doctor by myself."

"I'm sorry, sometimes the protesters pose as patients; it's for everyone's safety."

A woman's life is like that. We are always escorted: by our friends to the ladies and by our fathers down the aisle. It is what is expected of us. My debutante friends had to choose escorts -- one civilian and one military -- for the coming out ball and my high school dates always had to pick me up and drop me off at home, even as I was often older and more equipped to handle the world without such boys.

When I was engaged at 24, every professional service I talked to about the wedding planning wanted to speak to my fiance or my parents. When I called my bank today to discuss an issue they asked -- merely as a matter of security, but I know how it felt -- if there was a cosigner on an account.

There's a reason it's women and children first. It's because in the eyes of history and habit, we've long been mostly the same.

At least married you get the force of your husband's authority, if not your own.

In the mid-90s, I traveled to Ireland with that man I was engaged to. Because I made all the hotel reservations, I quickly became Mrs. Maltese and he was referred to as Mr. Maltese. We learned quickly not to question this.

The point of this is not that I was outraged. The point of this is that I am outraged now because my dominant reaction at the time, beyond anger and incredulity, was simply the quiet recognition of what I had always known as a woman: to be property is to be loved; to be married is the closest you will ever be to becoming an adult.

I never got married.

I'm 37 now. I'm not supposed to tell people that. After all, as perpetual children, women are also supposed to look perpetually young. Maybe if I looked my age I'd be more careful about it. Maybe I just don't care anymore.

I've got a lot more sense than I used to. I'm less complicated now in some ways. And way more complicated in others.

And in the great gay marriage debate, I keep coming back to this feeling that in the end this whole clusterfuck national debate on my humanity is really a secret, subconscious referendum on whether women can ever be adults, can ever be unescorted, can ever look like something that wasn't designed for the male gaze, can ever possess their own desire. It is also, it seems for many people, a referendum on whether masculinity can exist without the perpetual female child present to confirm its existence.

I've been an adult since I left home, because I've had to be. That was twenty years ago. Sometimes I've succeeded. Often I've failed. But I've continued on, and I've tried to do better. I don't regret much, but there was certainly some stuff I could have done without; I just didn't know it at the time.

That the world has both changed and that I'm a little bit crazy is so clear to me the more I meet people who have never felt all this, who have never had to.

So is the way much of this is just a pretty far gone memory to me now, like the butcher shop we got our meat at when I was a child.

In the late '90s I had an abortion. There were no protesters. The doorman in the fancy building on the Upper West Side smiled at me, and the man involved in the matter came with me, as was appropriate.

Which means I was once escorted.

In this particular lexicon of being, I wish I didn't know what that means.

Prop 8 and its ilk are not referenda on me as a gay person or as a woman, although they are the first overtly and the second covertly.

These votes and discussions and debates and decisions are referenda on what we deem an adult human to be or not be.

It really is that simple.

Sometimes people ask me what it's like to be bisexual or gay or whatever word we're using today. They'll ask how I knew. Or what's going on with my genderqueer stuff. Or for advice on speaking to others about these same issues. And I'm mostly happy to answer, because, let's face it, I'll run my mouth about anything if I have the time.

But I have things I want to know too: what's it like not always having to connect the dots about what people really think of you before you even walk into the bloody room?

Sometimes, people ask why I'm so public on my journal or why I want so badly to be famous and successful. There are flip answers to that, that you've surely heard me give. Oh, you know, like everyone in this business, my mother never loved me enough or No secrets, no blackmail are two of my favorites.

But there's a third answer. A truer answer. With a female body and a queer heart, my life was always going to be public anyway.
Collapse